Jenny has been so inspired by her trip to Milan and Berlin this year. It has sparked ideas for the office (see her idea for client shopping trips and relationship building with international manufactures), it has renewed passion for design and craftsmanship. We’ve posted some of her pictures on our social media platforms but here is a further selection and feature

The trend, as per this year’s Milan Furniture Fair (Salone del Mobile. Milano) Trend Lab, is what they call the ‘SuperNormal House’ and it fits into their Megatrend Map as shown on the graph below: 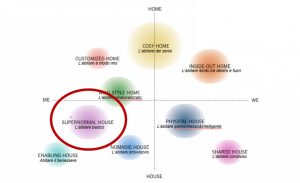 ‘If you ask me to sum up the concept, […] it’s like when you see a ballerina dancing – it looks very simple, but actually there’s a lot of work behind every movement.” – LivingSpaces – Salone del Mobile. Milano Trend Lab, 2016

It is, ironically, a move away from design as a trend – away from status, appearance, objects, ‘adding to’ and towards simplification, efficiency, durability, ‘subtracting from.’ It is about celebrating design for what it should be – improving people’s lives. By designing according to this philosophy, we can give people the peace of mind that comes with de-cluttering and free them from the mistake of unnecessary, additional acquisitions.

SIMPLEXITY can be applied in all forms of design – for example, Jenny was further inspired by ‘SlowWear’ while in Milan – a clothing brand and concept that is all about classic, contextual designs, durable materials, and exceptional craftsmanship – “La Mode Durable.” (Check out their website here and also have a look at Philip Pikus who is a South African champion of this – he combines excellent quality and style, as well as ethical sourcing and manufacturing to his locally made textile range)

CRAFTSMANSHIP is another theme explored in this feature, the culture of craftsmanship and demand for perfection that the Italians have is unparalleled and will be revisited throughout this discussion.

Another aspect of SIMPLEXITY is the move toward lower-intensity technologies, our world today is run by technology that is constantly improving – in some cases, so much so that we lose touch with reality and our own human nature.

Jenny had a discussion with a filmmaker she met at the Tom Dixon function about how much time social media takes, in addition to apps and general screen time. She feels there will be a move away from this to quietness, contemplation and mindfulness – proper conversation and arrangements that are kept over time.  Or a making of screen free spaces physically and emotionally. Jenny calls it ‘SlowSpeak’ – To go with slow for slow wear etc.

FIND THE COMPLETE SALONE DEL MOBILE. MILANO TREND LAB DOCUMENT  BY LINKING ON THE LINK: LivingScapes3 – It succinctly talks us through the ‘SuperNormal Trend’ and concept of ‘Simplexity’ by using examples of designs created under this banner.

Fendi Casa – in the Kitchen Area – kitchens, furniture, lighting, metal detailing all round finesse. Use of stone for kitchen doors, leather brasS and glass detailing

Pedini – Theme Architecture and Design in the kitchen – Very slender construction – counter tops and shelves, doors 5 mm thin veneer over a fluted Aluminium construction. Sliding door systems that move with such ease. Introduction of warmth and the strong theme of greenery and plants that runs through many of the pavilion displays. Use of metallic elements, brass shelves, aluminium doors, Highly engineered sliding systems very easy to use – Private Clients being assisted behind a glass and greenery screen

Roche Bobois – New – Aqua dining table designed to look like a water drop with base cut from a single block of marble extends seamlessly to into black *Fenix coated polyurethane top. Designed by Fabrice Berrux whose work can be found at the Museum of Decorative Arts in Paris

Rosanna – What attracted us to Rosanna especially was the wall of green behind this indoor outdoor kitchen. A range of live herbs and plants in abundance, functionally arranged in removable containers with drainage. The main anchor of the display a tree, watering can and pack of herbs and plants.

The indoor outdoor kitchen is a one surface finish to doors and tops. The movable covers to cooking and cleaning areas made it like an irresistible toy.Sliding doors can open up to make it one big game!

Rosanna also had a growing cupboard. Behind closed doors with the correct food, water and light your fresh kitchen produce can grow.

A small arbour of fruit trees in the display conjures happy thoughts of spring sunshine and fruit picking.

A very popular exhibit with lovely lighting and objects to complement their innovative products.

Valcucine – The predominant theme of plants and green is realised here in the form of  a last cut forest. A large presentation shows the hand crafted draw and cupboard finishes possible. Its like a printers tray on steroids. Mechanics of super large lifting panels perfected

There are many other events interlinked in different ways in and around the city. A major example of this is the Fuorisalone.

One such event was the ‘Restaurant’ event with Tom Dixon and Caesarstone – curated by and with Arabesque (Arabeschi di Latte) – a food design studio founded by Francesca Sarti (Florence Architect originally)  with Bibendum Food Experience led by chef Marta Pulini. The theme was Air, Earth Water, Fire.

With ‘Air’ the culinary was about putting air into foods – meringues, light turkish strand – it was delightful. (As well as taking air out). ‘Water’ was Gremolita crushed ice and infusions. ‘Earth’ root vey, growing food in the earth. ‘Fire’ – cooking methods, cake/bread like super risen cheese cake, topped with edible ash then cooled. Incredible. Taking the four elements that essentially make food possible (Earth (growing), Water (watering), Fire (Cooking) and Air (Preparation)) and then transforming them into a culinary experience.

Tom Dixon’s presentation was all about manufacturers of culinary equipment – domestic and commercial – he also talked about the importance or materials and craft. 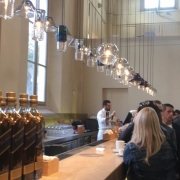 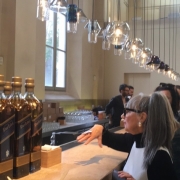 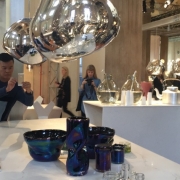 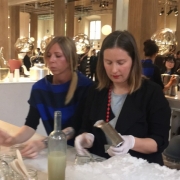 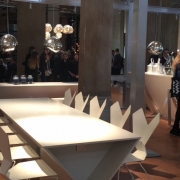 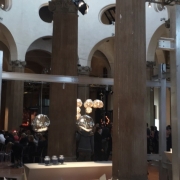 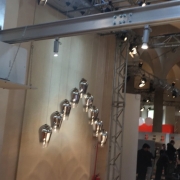 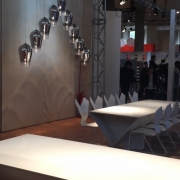 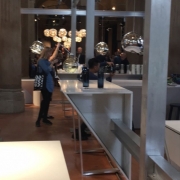 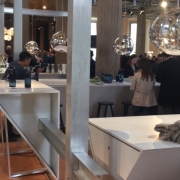 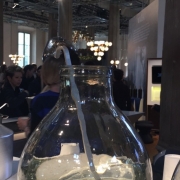 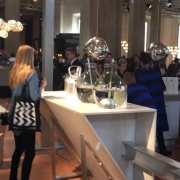 There are also some more major areas that have more area specific shops and exhibitions associated with the Fuorisalone. Via Tortona at Porto Genova for example and the Brera Design District

BRERA DESIGN DISTRICT – The quote that resonates with Jenny here is “designing is listening.”  To quote the Brera Team (Christian Confalonieri & Paulo Casati) “We live in a complex society. The debate and exchange of views is the order of the day. The idea of common good is going through huge changes and finding ones way of being in the world is getting more and more difficult. Listening which is not a synonym of passivity and laziness as some might think is the highest expression of human activity because it helps us capture the complexity of reality. It is exactly to listening that Brera district will dedicate it’s 7th edition to, as now, more than ever “Designing is Listening.”

“This idea also highlights the didactic and educational power of good design. While it is true that a good teacher is someone able to imagine what a person could become even before it happens, a good designer (in any field) can see how the world will be through his work. Thanks to that, research and listening are deeply interconnected.”

Another big initiative is “Ventura Lambrate…” to quote Magriet Vollenberg: “My vision has not changed in all those years; a completely curated area with space for upcoming international design talents, creative talents and new generation academy works. On top of that Lambrate does not shy away from showing research and concept phases of the presented works. This is what sets us apart from other design event in Milan and over the world.

Giorgia Lupi, (an information designer in New York, founder of ‘Accurat’ and winner of a 2016 design lecture award) sums up the themes of Milan 2016 so beautifully with the following quote: “what I do when I start every kind of project is to surround myself to get truly inspired by what is around me. I realized I am mostly inspired by visual languages that are somehow already conventional, the aesthetics of which are familiar to our minds: if a set of spatial compositions works in a context I observe, I believe there should be a way to apply them to the designs I am working on. I would then define successful designs as the ones able to balance convention (i.e. Forms our minds are already familiar with) with novelty: new features that can engage and delight people in the hope they will stick around our visualization a bit longer, and then in the hope we can move the conversations in our fields forward

KEY IDEAS: listening, being receptive, creating things of worth and designing to make life better.

ARMANI HOTEL – The Armani Hotel in Milan – Use of a limited set if materials repeated makes for calm luxury.The illuminated chequerboard marble floor is reflected in the mirror as the fully glazed view of the ancient city and you walk around the mirror clad core of the building through the … lounge and coffee area
Armani himself, now apparently 82 was on site and controlled avery last detail when this was built 4 years ago.


no images were found

MILAN WALKABOUT – We had a great day with beautiful weather. Lots of feasting for the eyes and long walks on tired feet through beauty, history, interest (the old buildings and their details, designer shops, shoes made from chocolate) and lovely people.

They are very stylish, some dressed so well it makes you stop and take a second look. Saw an amazing elderly lady with her grandson (probably in her 70s) – she looked like a fashionista – razor sharp dressing! I started asking a few if we could take a picture – the woman on the bicycle was very sweet and knows Cape Town – did not mind the picture at all. The two young women were very sweet and are twins – one an architect the other interior designer on a shoot and they have their own fashion blog designbygemini.com. We saw them in the cutest courtyard where there was also an exhibition called Soft Home – interiors and digital experience – Elle Deco Italia.

We walked through Galleria Vittorio Emanuele II, which is the oldest ‘shopping mall’ – construction started in 1865!

Had lunch near our Airbnb (in Via Giovanni da Palestrina near Loreto Metro) and then walked down Corso Buenos Aires, Corso Venezia to the Duomo (cathedral) which seemed to call to us for a visit.

See the below collection of images starting off with a view of gedächtniskirche and Kufurstendam from top floor of  the Astoria Waldorf. The old church built in 1890 was badly damaged in WW2 so a new building was constructed next to it to house the church functions. The ruin stands as a memorial in West Berlin and is fondly referred to as “der Hohle Zahn” which means ‘the hollow tooth’

The Berlin Victory Column – constructed after the ‘unification wars’

Blossoms in early spring in the Tiergarten (animal garden the former hunting grounds of the Kaiser) A beautiful part of Berlin’s many Green spaces that help temper the heat in summer and are home to birds, badgers, squirrels and the occasional boar. Wolves have also become more prevalent recently in the countryside. Good for walking and cycling.

Gleisdreieck (track triangle) Railway tracks unused since WW2 are being converted into extensive trails for walking, bikes and playgrounds